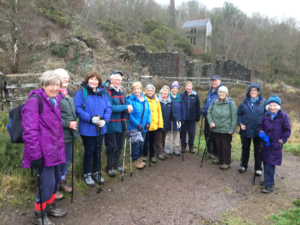 Thank you Ann and Warren for leading an interesting walk to Okel Mine in Calstock last Monday.  Frank Booker’s book  “Industrial Archaeology of the Tamar Valley”, published about 40 years ago but still relevant, makes interesting reading.  This is a relevant extract from the book. 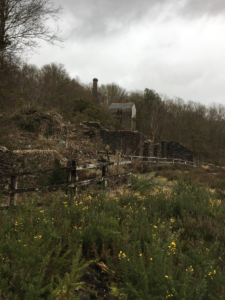 The Hingston Down Mines

1847 and 1858, when over 3,000 tons of copper ore was raised. The surface buildings to be seen today date from this time. Some stamps erected here in 1851, when the mine employed over eighty people, were named the ‘Bentinck stamps’ in honour of ‘the great advocate of human history Lord George Bentinck’.  There was an ambitious plan in 1909 to work the Danescombe sett of this mine for arsenic, which was to be treated at the Rumleigh arsenic works on the Devon side of the river; but this fell into abeyance. Although never a large producer, this mine’s ruins have a picturesque importance today. 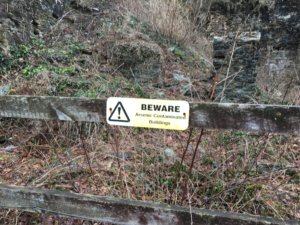 This in its heyday was one of the most important mines near Calstock, and its busy, extensive workings on the river bank opposite Gawton mine used to fascinate paddle-steamer passengers in the 1870’s. The Great Cross Course which shifted the main Iode at Devon Great Consols also dislocates the main lode here. The mine was restarted in 185o mainly to work a lead lode which was then more in evidence than copper, although it went on to produce only 2 tons of lead. In 1850-51 the company working it built a quay capable of taking vessels of up to 200 tons, thus saving the cost of horse-hauling the ore to Calstock. The main engine shaft, which still has part of its engine house intact, reaches 80 fathoms below the level of the Tamar, and the main copper lode passes under the river into Gawton mine.

Although it produced 213 tons of black tin, the mine mainly raised copper (13,215 tons) and arsenic in its later years. In 1883 it worked with Cotehele Consols in the Danescombe Valley, treating the iron pyrites from that mine for arsenic. There are still extensive ruins of the arsenic-treatment plant, including part of the line of flues which terminated in the stack whose stump (shorn of its top course of bricks) stands near the railway.  Okel Tor stopped active working in 1887.

Following the confirmed cases of coronavirus in … END_OF_DOCUMENT_TOKEN_TO_BE_REPLACED

The Ship Inn at Noss … END_OF_DOCUMENT_TOKEN_TO_BE_REPLACED