native Venice and a few other cities, including London, which have often been called the picture postcards of their age. On closer examination, said the speaker, the scenes depicted are not such as would nowadays be regarded as typical postcard material, but rather as views of contemporary urban life, warts and all. He was in fact a vedutista, a painter of realistic views, a genre which did not accord respect among his artistic contemporaries. 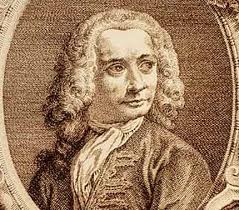 He was born Giovanni Antonio Canal (a very suitable surname for a Venetian!) on 18th October 1698. As a child he was nicknamed “Canaletto”, the diminutive form of his real name, and later adopted it professionally. He started his working life as a stage set designer for his father Bernardo, but in his early twenties he was influenced by view-painters like Vermeer, Caspar van Wittel and Luca Carlevaris, under the last of whom he studied for a while. This led him to abandon the theatre and devote himself to view-painting. Throughout his life he never painted a single portrait.

His chosen field enabled him to make a considerable income from commissions by wealthy Europeans undertaking the Grand Tour, which always included Venice. Having no postcards or photographs to take home, these people were eager to have one of Canaletto’s paintings.

Professor Edwards took several examples of Canaletto’s work to illustrate the astonishing attention to detail that they exhibit, beginning with “The Stonemason’s Yard” (c.1725). He stressed that such a view would never now be considered for a postcard, being a totally authentic workplace and showing other figures like the woman spinning on the balcony, with another woman retrieving her child who has just fallen over and hurt himself. 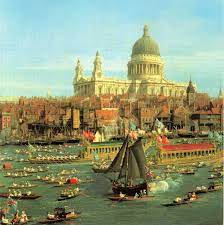 Between 1741 and 1745 Canaletto went to Rome and Padua, as life was disrupted by the War of the Austrian Succession. In 1746 he moved to England, living between 1749 and 1751 at 41, Beak Street, Soho. In London he painted similarly realistic views of London, with the Thames replacing the Grand Canal. In 1747 he painted Westminster Bridge under construction, the arch of the painting being the temporary timber props due to be removed when the masonry is in place. In 1749 the central portion of this bridge collapsed and the artist was there to record the result. He also received commissions to paint stately homes, such as the Duke of Northumberland’s Syon House.

As well as vedute (views) he also painted capricci. These were a popular art form where the painter covers a canvas with several different objects combined into one scene, like a modern photomontage.

Canaletto painted about 900 pictures, mostly of Venice for Grand Tourists. The 4th Duke of Bedford paid £188 for 24 of them, about £28,000 in today’s money, and they now hang in the dining room at Woburn Abbey. Very few pictures of Venice remain in that city; Venetians have the views, many essentially unaltered, on their doorstep. This point was well made by Prof. Edwards when he showed modern photographs taken from similar viewpoints to those of the painter. A large number of the paintings have ended up in Britain, as that is where many of the Grand Tourists came from.

In 1755 Canaletto returned to Venice, but the demand for vedute had slackened. Such art was increasingly disparaged and only in 1763 was he finally recognised and admitted to the Venetian Academy of Fine Arts. His last work was the interior of St. Mark’s (1766) and in 1768 he died at the age of 71.

Modern critics cannot decide whether Canaletto used a camera obscura as a starting point for his paintings, but Prof. Edwards suggested that it was unimportant either way.

Its a small step back to 'normal', but Tavistock's Pannier Market is due to … END_OF_DOCUMENT_TOKEN_TO_BE_REPLACED