Our Autumn meetings ended with a showing of Orson Welles’s celebrated film, The Third Man (1947). Our Winter series will end similarly with a film, Bride of the Wind (2002), based on the high-profile life of the bewitchingly gifted Alma Mahler, wife to, successively, Gustav Mahler (composer), Walter Gropius (Bauhaus architect) and Franz Werfel (novelist).

Bride of the Wind brings to life several of the “Aspects of Austria” explored during our meetings: e.g. Austria’s musical tradition – here in particular Gustav Mahler. Or the ferment of artistic creativity in Vienna between 1880 and 1914 – Sezession and Art Nouveau: the artists Klimt and Kokoschka were central players in the Mahlers’ social circle. Or the political ramifications of Austria’s defeat in World War 1 – collapse from European super-power to non-aligned small state between Western Europe and the Balkans. Or, perhaps most telling of all, Jewish contributions to Austria’s – and the world’s – 20th century intellectual and artistic life. And indelibly linked with this, the dreadful impact of Nazi ideology which still endures in our minds: Ferdinand Porsche was of course a genius engineer, but the paymasters who commissioned the ‘Volkswagen’ also commissioned the Tiger Class Panzer.

Honouring the memory of Jewish destinies in this period, we read Stefan Zweig’s short story Buchmendel – about a brilliant but unworldly ‘bibliosaurus’ stupidly snuffed out by military fiat because of imagined pro-Russian sympathies. And we enjoyed some of the poetry written by Stella Rotenberg, an Austrian emigrée who lived for over 60 years in self-imposed exile in Leeds.

But as intellectually and imaginatively stimulating as all this subject-matter was, the best bit was social. One of our 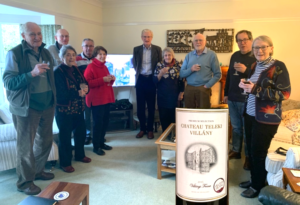 members grew up speaking only English, but his Austrian mother had been another of the fortunate escapees. Prompted by our theme, he researched her family background: she was a member of the Teleki family which owned a significant wine business south-east of Vienna. They had to disinvest from that business during the late 1930s because of their Jewish heritage. But the winery continues to this day, now based in Hungary. Hearing of our interest, the present owners of Chateau Teleki Villány sent over a case: thank you, Anthony, for sharing your family story with us – and for that excellent wine!

If you have a … END_OF_DOCUMENT_TOKEN_TO_BE_REPLACED