It was a very fortunate 35 members of WDU3A, who heard Andrew Thompson’s learned but accessible and engaging talk. Right from the beginning he was at pains to point out that he was not going to talk about the archaeological artefacts on Dartmoor, but rather about the history of the study of archaeology on Dartmoor, and the ways in which this study has changed over the last 400 years. How it has evolved as new technologies became available, how succeeding generations with different preconceptions and interests, asked new questions.

Dartmoor has but a passing reference in William Camden’s Britannia of 1607. John Aubrey’s Monumenta Britannica 1663-93 was more influential, especially his work at Avebury and Stonehenge, which he supposed to be Druidic temples.

Later William Stuckeley was the pioneer who from 1720s first recorded what he found in his diggings at Avebury and Stonehenge in detailed drawings. He widened his excavations following 2 “avenues” through what he claimed to be a ritualistic serpentine reshaping of the landscape. He took the Druid idea further drawing parallels with Christianity and a priestly class. This erroneous misconception became a deeply entrenched British phenomenon that influenced archaeological study for more than a hundred years. In fact we were told that from our scant knowledge of them, Druids are first mentioned in Roman times, so they post dated Avebury and Stonehenge by a millennia or more. They are however an enduring myth that set the early framework for interpretation of Dartmoor’s archaeological remains.

Although Dartmoor has the richest Bronze Age landscape in Europe, archaeologists were very late to develop an interest here. Our moorland was considered an inhospitable desert, with bad climate and marauding, pillaging and primitive locals. So that early exploration started from the “main roads” at Crockern tor, Wistman’s wood and Childe’s tomb.

Interest in archaeology was growing amongst the intelligentsia, notably in Tavistock with Mrs Bray, the vicar’s wife and friend of Robert Southey, Poet Laureate.

She sent detailed letters to Southey of her explorations locally with her husband in the 1820s and 30s, publishing her findings in 3 volumes. She totally accepted the Druid interpretations, calling Wistman’s wood the last remnant of a Druid grove and rock basins were to her for Druidic rituals. Andrew told us that like many at the time she was very anti Roman Catholic, and drew parallels with the Druid priestly class and the Church of Rome. Andrew said these books provide strong evidence of how contemporary debates became incorporated into archaeological understanding.

However, there was a growing interest in archaeology and scientific analysis with one of the first being the Vicar of Widecombe who surveyed Grimspound which he measured and in 1829 Shillabeer drew the first accurate and detailed plan of the findings.

This was followed in 1848 by Samuel Rowe’s A Perambulation of Dartmoor in which he categorised the various, still Druid, monuments on the moor into rows, circles hut circles, etc.

Any progress on dating what they found was hampered by the acid soil dissolving most buried remains and the entrenched religious views of the time demanding a literal interpretation of the Bible, which provided an intellectual straight jacket.

In William Pengelly’s detailed exploration of Kents Cavern, in the 1820s onwards, bones were found, human and extinct animal bones lying together, also a worked flint. There was an acceptance of the layering principal in archaeology with the older finds being lower down, and newer artefacts above and, eventually, to the British Association accepting the antiquity of humans. Andrew said this coincided with more careful excavation and recording whereas there had been so much looting before. Gradually too, the Druidic interpretation of archaeology on the moor faded, though the “myth” persists to this day. As Andrew later wryly remarked, if he were to write a book on the Druids on Dartmoor for the visitor centre, it would sell better than any other book.

In the Transactions of the Devonshire Association, Spencer Bate provided a detailed drawing of his excavations on Penn Beacon in 1872 and at Two Barrows on Hameldown where a bronze dagger was found. Dating of such artefacts was a problem, persisting until the advent of radiocarbon dating in the 1950s and theories such as the Vikings being responsible for building the barrows abounded.

The Dartmoor Exploration Committee was set up, consisting of local worthies, Burnard, Hansford Worth, father and 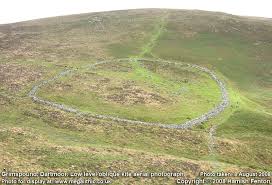 son, and Rev Sabine Baring Gould. In 1893 they excavated 20 huts in Broadun Ring in 3 weeks; Andrew almost grimaced in pain at their indecent haste compared with modern standards. This was followed by a visit to Grimspound where they excavated 15 of the 24 huts in 17 days  It is easy to be critical, but they did develop a technique of excavation and wrote detailed reports.

During the “restoration” of the Hingston Hill stone row, they even preserved all the soil removed and it is in museums now. Work at the Raddick hill hut circle revealed a pottery cooking pot.

It was the youngest member of the group, Hansford Worth junior, who wrote his famous book, “Dartmoor”,  of their explorations.

In 1950s new approaches were pioneered by Lady Aileen Fox, who excavated prehistoric circles and enclosures in advance of the flooding of the Avon valley dam, with very good recording.

Dartmoor reaves were another project of increasing importance, these embankments of stones were early identified as boundaries, but this interpretation was lost later and they came to be regarded as trackways of probable Mediaeval origin. This erroneous idea stuck until Andrew Fleming started his work in 1972 onwards on landscape archaeology.

During repeated summers spent on Dartmoor mapping large tracts of land, he was able to build up a picture of 3 different types of reave, and how they sit in context to each other.

The coaxial reaves delineate small field systems; the long linear reaves, such as the Great Western reave, lie along the boundary between grazing and open rough moorland and, lastly, the watershed reaves delineate territories.

This suggested a hierarchical society with the resources to harness labour, coupled with a suggested dating of mid Bronze age, it refuted the previous held  view of the builders being a primitive people.

Further mapping of reaves and hut circles on Holne moor showed a gradual coming together of little settlements.

In the last 50 years or so there has been a diversification of interests from the Bronze Age to include the Middle ages and tin mining. In 1960 Helen Harris’s book Industrial Archaeology of Dartmoor, went beyond just mining to embrace quarrying, dynamite manufacture, and all industry on the moor. Butler wrote his 5 volume Atlas of Antiquities and Phil Newman his Field Archaeology of Dartmoor.

There have been two major new discoveries in this century with the White Horse Hill cist and the Sittaford stone circle. The Whitehorse hill find, its intact contents miraculously preserved in anaerobic conditions, is a whole talk in itself. The Sittaford circle, with its recumbent stones, has finally provided a reliable date from the radiocarbon dating of undisturbed soils and pollen grains under the stones, of 2400BC.

Today archaeologists are employing a range of new techniques using geophysics and remote sensing for non invasive study of the landscape. He mentioned gradiometry using a magnetometer, ground penetrating radar, and laser beam surveys of every step giving detailed profiles, and all affordable on the average sites. LIDAR an aerial laser scanning which cuts through vegetation, is more expensive and these surveys often are available to archaeologists only as a result of an environmental survey say for flooding. 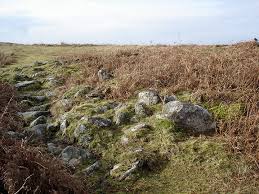 Using these techniques new work at the Dewerstone in the last two years has indicated that the remains there, are not Iron Age as previously thought, but Neolithic, a radical rewrite of our local history.

Drones are now buzzing overhead and capturing information that enables them to recreate in 3D what a site looks like. These new ways of looking at a site mean that the results can be interpreted in a way accessible to the general public in visitor centres, museums and on websites.  Archaeology on Dartmoor has changed from the preserve of the wealthy and leisured, to a fascinating subject accessible to us all.

It was a very … END_OF_DOCUMENT_TOKEN_TO_BE_REPLACED