Bryan Short gave us an interesting and detailed account of the fate of Alexander The Great’s generals and their impact on the world. 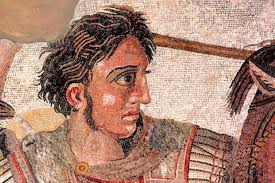 Alexander died in 323 BC without naming a successor.  His complicated family tree gave no clear successor.  One of his generals Perdiccas was appointed Regent.  He and other generals in the Diadochi including Ptolemy, Cassander, Lysimachus, Antigonus and Seleucus became rulers in the vast empire which stretched from Macedon in Greece to the Indus Valley and the Persian Gulf.

After Alexander’s death there were uprisings in many parts of the Greek Empire.  The generals tried to assert their rule locally while defending themselves from each other’s ambitions to expand.  There followed a series of wars between them in which several generals and members of Alexander’s family were murdered or killed.

Perdiccas claim to the succession rested on a ring belonging to Alexander which had been given him by Alexander’s wife Roxanna.  Perdiccas rule was outstandingly brutal.  For example, two of his cities set fire to themselves rather than be taken by him.  His aim was to expand and eliminate the other generals.  He was ultimately assassinated by his own officers after leading a disastrous campaign in Egypt where his army was stranded and starving on an island in the Nile. Many tried to swim for it and an estimated 4000 were eaten by crocodiles. The rest surrendered to Ptolemy who had them taken off to serve in his own army.

Ptolemy in Egypt was a more pragmatic ruler.  He was popular and there were fewer revolts.  He hijacked Alexander’s body taking it from Babylon to Memphis and then to his capital Alexandria which became a centre of Greek culture. In Alexandria he built the famous library and pharos.  His dynasty lasted 300 years until the death of Cleopatra.

Antigonus expanded his rule in the Middle East by war.  He was unpopular with his troops but mitigated this by looting holy shrines which made his officers wealthy. His attack on the port of Rhodes failed and the vast amount of hardware left behind was used to build the Collossos of Rhodes.  Antigonus’ Macedonian troops were wiped out in his invasion of Arabia and he fled for safety to present day Iraq.  Seleucus at first welcomed him but Antigonus eventually forced him out.

Seleucus crossed the desert to Egypt – an incredible journey by horse, where he served for a time with Ptolemy’s army. Eventually on his return from India in 312 BC he retook Babylon with only 800 men. With Antigonus dead he made peace with his son Demetrius. In time Seleucus ruled most of Alexander’s old empire excluding Greece and Egypt.  During this time he built 60 new cities each one having 2 grain silos so that no-one went hungry.  He founded the city of Antioch and made a woman his chief engineer. The Seleucid Calendar was used until 1000 AD with the baseline the year Babylon was taken. His dynasty lasted for 300 years until the arrival of Rome.

Following the confirmed cases of coronavirus in … END_OF_DOCUMENT_TOKEN_TO_BE_REPLACED

The Ship Inn at Noss … END_OF_DOCUMENT_TOKEN_TO_BE_REPLACED