In December, West Dartmoor U3A held another meeting on Zoom and was given a very interesting, illustrated talk on Lundy by Simon Dell. He has known the island since childhood, has acquired an encyclopaedic knowledge of it over the years, and has been a guide there for twenty years.

The talk was compiled in 2019 to commemorate fifty years of management by the Landmark Trust and incorporated a series of photographs spanning that half-century, as well as a few 19th-century pictures. 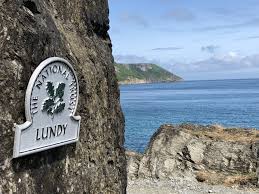 Since the mid-1920s Lundy had been owned by the Harman family, but the Second World War and subsequent austerity had led to deterioration of the island’s buildings, including the 13th‑ century Morisco Castle, and its infrastructure beyond their resources to repair. Albion Harman died young in 1968 and his widow and sisters decided to put Lundy on the market. The obvious choice would have been the National Trust, but at the time it was unable to put in a bid.

A public appeal was launched to raise the funds necessary for the island to be donated to the National Trust, headed by a cross-party alliance of three local MPs, Jeremy Thorpe, Peter Mills and David Owen. At an auction in Barnstaple, Sir John Smith of the Landmark Trust put in a successful bid for Lundy with £150,000 donated by Sir Jack Hayward, and on 28th September 1969 the island was donated to the National Trust, who leased it back to the Landmark Trust to manage.

Earlier in 1969 a serious landslip severed the road linking the landing bay to the rest of the island, rendering it 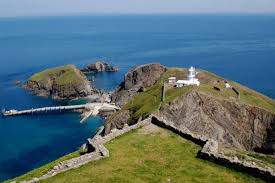 inaccessible to visitors, so this major repair task was a high priority. Many of the buildings, for example the hotel, needed to be virtually demolished before restoration. The Heritage Lottery Fund financed the restoration of the church, especially the old East Window, blown out by a storm in the 1960s. The forge was restored by a blacksmith on holiday.

Staff accommodation was built using prefabricated units from Sweden, and in 1999 a proper jetty was built to make it easier to unload the supply ships. The MV “Oldenburg” became the primary vessel, and livestock was transported using a DUKW amphibious landing-craft. 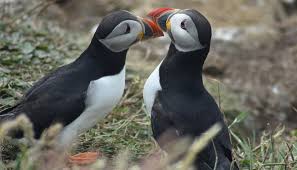 The Post Office with its puffin stamps, set up after the cessation of GPO services, continues to be a major source of revenue for Lundy. The lighthouses at each end of the island belong to Trinity House, not the National Trust, and are now automated. Work as necessary continues, and there is normally a steady stream of visitors supporting the maintenance of Lundy’s assets.

In 1977 Her Majesty the Queen and HRH the Duke of Edinburgh visited the island, and eventually Sir Jack Hayward’s ashes were laid to rest there.

It’s been a remarkable 50 years for the Island and, restrictions permitting, members of West Dartmoor U3A may get a chance to visit in 2021 with Simon Dell as guide.

The weather's pretty wet and although its great to … END_OF_DOCUMENT_TOKEN_TO_BE_REPLACED

Now available as an … END_OF_DOCUMENT_TOKEN_TO_BE_REPLACED