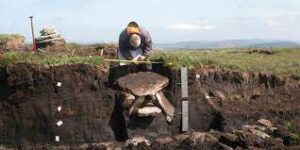 A recently retired archaeologist, Jane Marchand, gave West Dartmoor members a very interesting account, accompanied by slides, of the extraordinary revelations following the excavation of a cist burial on White Horse Hill in the North Quarter of Dartmoor Forest. The cist (pronounced kist), a stone burial chamber, was discovered in 1999, when some of the stones began to protrude through the eroding peat, but its excavation only began ten years ago. The cist contained a cremated burial and, like the other 200 or so known cists on the Moor, was aligned  NE – SW.

Luckily most walkers use the peat pass close by as the terrain is treacherous and this fact had helped in preserving the site. However, a protecting wall was built to protect against further erosion of the peat.

Permission to excavate was obtained from the Duchy of Cornwall, which owns the Forest, from the MOD, in whose firing range the site lies, and the commoners, who have grazing rights there. By sampling the peat, archaeologists established a date of around 3,500 years ago for the burial, that is late Neolithic to early Bronze Age. The work was carried out by two Cornish archaeologists and six from English Heritage. After removal of the capstone, the contents were wrapped in plastic sheeting and taken in a wheelbarrow to the nearest point accessible for a Landrover, a track below the adjacent Hangingstone Hill.

The remains were taken to a laboratory in Chippenham for micro-excavation and conservation. There was charcoal from oak and hazel that had been used for the cremation, which had been so hot that no trace of DNA remained in the bones to establish where the individual might have come from but some teeth suggested an 18 – 25-year-old. There were the remains of only half a body, which apparently is fairly common in cist burials, and they were dated to 1800 – 1600  BCE. A charred stick of coppiced hazel was found, presumably some sort of boundary marker for the cist. This took the known date of coppicing back several centuries.

Over 200 beads were found, one of tin, 7 of amber, 92 of Kimmeridge shale and 112 of clay. The shale beads must have come from Dorset and the amber, originating in the Baltic, may have been traded in from Wessex. The amber beads were considerably worn, suggesting that they may have been heirlooms. The beads had formed composite necklaces, common in Wessex, there being two others from Devon, from Upton Pyne and North Molton. There was a thin studded bracelet, which had 33 tin beads, two being missing along with one of the end-fasteners. These were strung on 6 braids and this find is unique in Western Europe. There were some ear-studs of spindle wood that had been turned on a lathe, setting this technique back 800 years.

The basket which had contained these items was meticulously cleaned and conserved, being kept in a deep-freeze, and proved to have been made from the fibres of lime tree bark and stitched with threads of cow hair. A piece of textile with intricate stitching along with a copper alloy pin suggested some sort of cape and that the wearer was female. Most enigmatic was a piece of animal pelt, which travelled to several laboratories in Europe before being confirmed as that of a brown bear. Whether the bear was local is not known.

The burial contained moor grass in a condition suggesting it had been picked in July and pollen from meadowsweet, presumably used as a floral tribute to the deceased.

The surrounding peat contains layers of tephra (volcanic ash) from Icelandic eruptions over the ages and the anaerobic conditions provided by the peat are responsible for the remarkable state of preservation of the organic remains for such a long period of time.

There is still more work to be done on the discoveries and most of the items are now in Plymouth Museum, though not all on display.

Bryan's topic was a … END_OF_DOCUMENT_TOKEN_TO_BE_REPLACED

The Amblers enjoy a … END_OF_DOCUMENT_TOKEN_TO_BE_REPLACED