His full name was ‘Michelangelo di Lodovico Buonarroti Simoni’ and he was born in 1475 at Caprese in Florence. 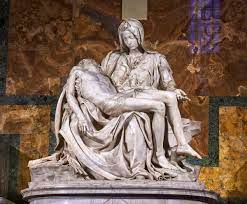 He was a sculptor, artist, architect and poet.  He worked at the start of the High Renaissance.  Before his time art was ordered by the Church.  Now wealthy merchants began to take over sponsorship of the arts and used their money to order extensive works.  Originally artwork was not 3-dimensional at all and was rather flat.  A change came at Michelangelo’s time.  People were represented life-like, real people with emotions and movement.  Backgrounds for the first time showed perspective – you could follow the scenery into the distance.   Shading and shadow was introduced and scenes really came to life with complex interactions.

When Michelangelo was 13 years of age his artistic abilities were recognised and he was sent to Domenico Ghirlandaio, the most prominent Florentine artist, as an apprentice.  After only a year he was thought to have learnt all that he could from Ghirlandaio and was taken by Lorenzo de’ Medici the de facto ruler of Florence in whose academy he learnt more about sculpting.  There was not really enough work, and he was always competing with other prominent artists such as Leonardo da Vinci for work.

There was political upheaval too and he left Florence in 1496 for Bologna and then on to Rome.  Many of his sculptures were produced at this time, Bacchus, a statue of the Roman god of wine with realistic muscles and flesh and the beautiful Pieta, a sculpture of the Virgin with the body of Christ across her lap after the crucifixion.

He returned to Florence for a few years but was summoned back to Rome by the pope.  In 1508 he was given the commission to paint the ceiling of the Sistine Chapel, the holiest part of the Vatican where popes were elected and inaugurated.  For the next 4 years he spent much of his time on his back painting.  The work was built around nine scenes from Genesis with other scenes around the edge including the twelve apostles which showed not only individual figures, but each was placed in a dramatic scene.

Peter’s enthusiasm spilt over to us, and we left with a feeling of fulfilment.

The sky was clear, visibility was great and the weather was perfect at … END_OF_DOCUMENT_TOKEN_TO_BE_REPLACED

His full name was … END_OF_DOCUMENT_TOKEN_TO_BE_REPLACED

Its become an annual … END_OF_DOCUMENT_TOKEN_TO_BE_REPLACED