I have tried unsuccessfully for over 50 years to get to the Isle of Skye, and finally managed it in May this year.

The holiday was described as Skye Black Cuillin for hillwalkers and there were 6 of us in total on the holiday – all males of a certain age – plus three guides.

The group was split into 2 groups, the hillwalkers including me, and three climbers who did the trickier hills. Our object was to do a Munroe a day.

Extracts from my diary give an indication of the weather and the terrain.

Day 1. Bla Bheinn (Blaven). 1227 metres of ascent. Some walking on footpaths, otherwise on rocky terrain. Weather wet and windy. Visibility less than 20 metres all day and zero on the top. All soaked through at end of walk.

Day 2. Sgurr nan Eag. 2490 metres of ascent with walk on footpath initially, then lots of scrambling on rocks and loose scree. Weather not too bad apart from a few heavy showers. Only top all week with views to neighbouring islands, plus top we did yesterday. 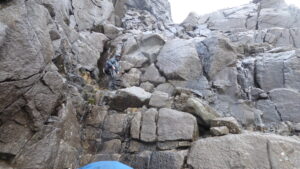 Days 4 and 5. Weather forecast made doing one of the Munroes too dangerous so did two coastal walks with weather showery at times and on one occasion wind so fierce some of the time was spent on hands and knees. Highlight of the day was seeing a pair of golden eagles.

Day 6. Sgurr a’Mhadaidh and Sgurra’ Ghreaddaid. 1320 metres of ascent with lots of climbing over scree and rock fields. Visibility at start and finish in valley but as we ascended through cloud layer weather got worse with rain and diminishing visibility. With some of the terrain we passed that was probably best.

Despite the weather it was a great holiday – although I do ask myself why I do these things. But hopefully Corsica later in the year.

His full name was … END_OF_DOCUMENT_TOKEN_TO_BE_REPLACED

Ten of the Amblers … END_OF_DOCUMENT_TOKEN_TO_BE_REPLACED