At our May meeting, David Tovey showed us an amazing number and variety of wonderful pictures many from the period 1880 to 1914 and all inspired by Polperro.

Recognised as one of the most beautiful fishing villages in Britain, Polperro has always attracted artists.  In the mid-19th century, most of these had West Country connections and were based in Plymouth.  The village was relatively isolated, its main links being by boat from Plymouth or by Horse Bus from Devonport.  A novel by Louisa Parr on smuggling brought in more visitors and in the 1880’s artists began returning from France.

Dick Ollivers illustrations of the model fisherman’s cottage was printed in various popular newspapers.  James Clarke Waites painting of the Jews’ House illustrates the main features, salt and fish cellars on the ground floor with outdoor steps leading to a wooden porch and living accommodation on the first floor. In the painting, the Jew’s house has a distinctive feature required at that time – in this case a chimney above the entrance door.  A tricky feature structurally.

William Borrows painting Polperro was among four shown at the Royal Academy in 1885.  It shows a view of the village from the Talland Bay path and was said to be the best in the exhibition.  Mouat Loudans Fish Sale Polperro was in the RA’s 1888 exhibition as was Llewellyn’s Twixt Night and Day – also Butler’s Hauling the Pilchard Net.  Henry Rheam’s On The Lookout was later 1890.

So, by 1890 Polperro seemed to be on the up, but would it become an important art colony like St. Ives and Newlyn?  Sadly not, for several reasons.

It is in a narrow valley surrounded by hills, so many houses have poor light in winter.  The large fishing fleet returns between 3 and 4am making quiet accommodation difficult to come by.  Finally, there are sewage and water supply problems!

In the 1890’s, the number and quality of artists in Polperro was disappointing.  But in 1894 Aguste Delecluse’s Art Academy arrived, waxing lyrical about the scenery, the beauty and courtesy of the locals and most importantly, taking up all the available rooms in the village for his 30 female students for three months. (Waitrose arrival in Tavistock might have a similar effect).

In 1900 Edward Ertz set up the first Polperro painting school; his reputation in Europe as an accomplished artist and teacher attracted new blood to the town as later did Butler and Feddon’s School of Painting.  Herbert Butler was an established artist painting in the Newlyn style.  His later water colours were more popular.  He specialised in dusk and night paintings with little detail and a distinctive stippled effect, as in “At Sunset Polperro.” 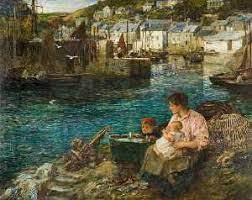 John Robertson Reid’s paintings are full of happy healthy people, his children are contented with their lot, the sea is very blue and there is no hint of the loss and bereavement shown in the Newlyn paintings.  His sister Flora’s painting “A Cornish Fishwife” is strangely different, dark and limited in tone.  Frank Heath painted pictures “Children On The Rocks” and “Old Aged Pensioners” in a similar style to Reid.

In the 20th century, American and European artists were the most important aspect of growth.  Henry Bayley Snell was the head of the Philadelphia Centre of Design for women for 40 years.  Over a 13-year period he fell in love with Polperro and brought students for 4 months each year.  Much of their work was hung in US exhibitions.  Thomas Moran, the Dean of US painters was heavily influenced by Turner’s romantic style. His Polperro painting “An English Fishing Village” was a figment of his imagination and out-turnered Turner.  Elmer Schofield spent 6 months each year in Polperro from 1893-1907.  His painting “The Outer Harbour Polperro” is Impressionistic with heightened colour and loose brushwork.  George Macrum (NY) painted many dilapidated roofs in Polperro to good effect.

Claus Bergen (Germany) painted more scenes of Polperro than anyone.  He 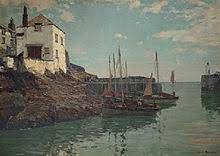 would spend several months out with the fishermen and painted “Homeward Bound with a Good Catch”.  His paintings of street scenes owe much to artistic license as buildings are moved across and up and down the harbour.  Cornelius Wagner painted “The Polperro Gaffer” (1911).  Both artists painted mainly for the German market.  Jan Walter (Dutch) painted “Composition of Masts” and “The Fishing Fleet” – the latter in a Pointelist manner, catching the reflection of light on water as the sun sets.

The 1930’s was the high point for Polperro’s Artists with works hung on both National and International stages.  David picked out three from this period.  The first Arthur Wragg had the greatest impact.  Wragg, a Christian Socialist, was concerned with the effects of the Depression on the elderly and the poor.  He used fierce satire to attach the powerful in society.  He wrote for the Peace News and designed front covers for the Tribune etc.  His book “The Psalms of Modern Life” (1933) was made Book of the Year in the US.  His work was a major influence on the introduction of the Welfare State in 1946.

The second, Frederick Roberts Johnson painted caricatures of the local fisherman.  His work was never exhibited and known only to his family.  His daughter has a memory stick of his work containing 250 images in a wide variety of styles.

Third, Oskar Kokoschka was an Expressionist.  He was expelled from Austria in 1938 as a “degenerate”. His pollical paintings include the “Crab” and “Polperro1”.  The Crab represents Chamberlain, the swimmer himself and the dead bodies perhaps the Czechs. His stay in Polperro ended with the outbreak of war.  He was an enemy alien living on a vulnerable stretch of coastline and was moved to another vulnerable coastline in Scotland.

At our May meeting, … END_OF_DOCUMENT_TOKEN_TO_BE_REPLACED

A new exhibition at … END_OF_DOCUMENT_TOKEN_TO_BE_REPLACED