At Great Mistor there is a rock basin called “Mistorpan” which is 3 feet in diameter and 6 inches deep.   This was one of the original Bond marks denoting the boundary of Dartmoor forest set out in a survey of 1609 as part of the ancient Perambulation of Dartmoor.   I have a half recollection that there was an arch of granite over the lip of the basin but it was vandalised in the 1950s.

There are several basins on Dartmoor, the best being the one on Kes Tor. 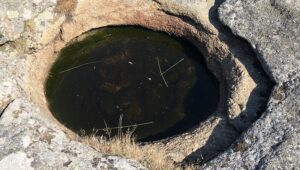 At Over Tor there is one known as “Mrs Bray’s Wash hand Basin”.  She was the wife on the Vicar of Tavistock in the early 1800s

There have been various theories as to how they were formed.  19th century writers, such as Mrs Bray, got very hooked up on Druids and suggested that they carved the rock basin out of the solid granite.

However, it is more likely that rock basins are a product of localised weathering and are formed when weak feldspar crystals (these are the larger white bits in granite) are split by the frost along their cleavages. This loosens small fragments which are later blown away by the wind thus leaving a small hollow. The process continues and gradually the hollow expands outwards and downwards. Water fills the hollow and then freezes, upon thawing more fragments are eroded which once again are blown away by the wind. 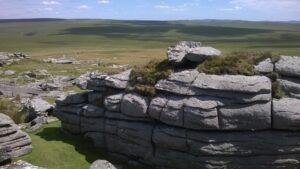 Our talk via zoom on … END_OF_DOCUMENT_TOKEN_TO_BE_REPLACED

Despite the news of … END_OF_DOCUMENT_TOKEN_TO_BE_REPLACED