In 1720 the first daily newspaper, the Daily Courant, was launched; Elizabeth Mallet became Editor and there was one page of foreign news, showing the value of the press.  The Examiner, a Tory paper, had Jonathan Swift as Editor.  Hack writers for hire eked out a living in Grub Street as shown in Hogarth’s 1736 engraving ‘The Distressed Poet.’

In 18th century most papers were sponsored or bribed by treasury money.  Circulation in London was about 100,000 and when Queen Anne put a tax on newspapers, some had to close.  Town and Country Magazine had oval miniatures in its Tete-a-Tete section of salacious gossip and scandal and only avoided libel by leaving out some letters in the names. The Newgate Calendar was very popular with lurid illustrations of murders.

John Walter bought the Daily Universal Register, renamed it ‘The Times’ and began printing chat.  He was put in the stocks before going to Newgate.  With the new improved steam press circulation, ‘The Times’, called the Thunderer increased its circulation to 50,000 and was expensive at 7pence.

The Observer, a national Sunday newspaper was launched by W. S. Bourne in 1781 as an unbiased paper, which he hoped would be a success.  It was bailed out by William Pitt on condition that no one wrote on parliamentary reform. They criticized the treatment of protesters in the Peterloo Massacre 1819.

In 1820 Caroline, the wife of The Prince of Wales – later George IV – was put on trial in The House of Lords, for 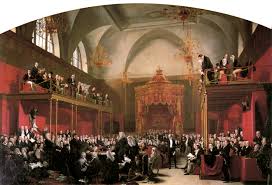 adultery.  This was reported widely in newspapers and the circulation of The Times – which was for Caroline – was doubled.  Some of the offices of other papers, who were for George, did not fare so well and were torched.  There were cartoons of mud-slinging and reports of the trial which were very tedious and Sir George Hayter’s painting, which included portraits of all those present at the trial, was displayed three years later.  Contemporary caricatures were on sale in print shops in Fleet Street and could be hired.

‘The Manchester Guardian’ reported the 1821 trial of the Cato Street conspiracy, a plan to kill all the members of the cabinet, and this led to the freedom of the press. 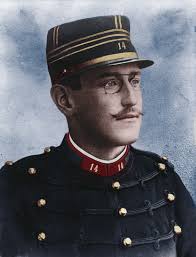 ‘Punch’ used cartoons and humour to ridicule the news and James Gordon Bennet, founder of ‘The New York Herald’, exposed scandals.  He handed over to his son, who lived the high life, leading to a cartoon of him being haunted by the ghost of his father.

‘The News of the World’, with a circulation of 12,000, published salacious stories and cost one penny and this was the first paper to have bill posters on the streets.  ‘The Illustrated News’ used Frederick Barnard’s etchings of the unemployed of London and dockers not paid if there were no ships – and this led to dockers being paid a wage.  ‘The Graphic’, believing that pictures had power, used etchings, ‘Homeless and Hungry,’ and ‘Eventide’ in a workhouse.

‘The Pall Mall Gazette’ Editor W. T. Stead’s exposé of prostitution of young girls led to a change in the law raising the age of consent from 13 to 16, but he was imprisoned for paying a young girl to give him the information.  The headline grabber was Illustrated Police News using sensational cartoons.  This was the first paper to be called a tabloid, being compressed.

Alfred Harmsworth – later Lord Northcliffe – made the ‘Daily Mail’ more readable with sport, a women’s section and serials.  He sent his papers to the troops and paid soldiers to tell their stories.  But as soon as he criticized Kitchener he was vilified. In 1903 he launched ‘The Daily Mirror’ for women but it failed, so he changed it to ‘The Daily Illustrated Mirror’. The paper conducted a survey of what people wanted and was the first to use photographs.  At the time, cameras were banned from court so reporters would hide them in their hats and take pictures secretly – as in the case of the Crippen trial in 1910.

In 1900 ‘The Daily Express’ put news rather than advertisements on the front page and had ‘our man in Patagonia…’  It was bought by Max Aitken – later Lord Beaverbrook – and had the first crossword and in 1936 – the largest circulation in the world at 2.25 million.

In 1931 Baldwin made a diatribe against the press barons, as he felt they were using the papers for their own propaganda, saying they had power without responsibility.

In the period leading up to the second world war, there were 30 papers in Fleet Street.  ‘The Daily Telegraph’ had a

grand building and the ‘Express’ had a chrome and glass Art Deco building (still there, courtesy of Goldman Sachs) with silver snake handrails leading up to the editorial offices.

In 1964 the ‘Daily Herald’ was relaunched as ‘The Sun’ and was initially unsuccessful until it was sold to Rupert Murdock, who already owned ‘The News of the World’.

In the 1980’s they began to move out of Fleet Street to Wapping, where they were using electronic printing presses and over time as other newspapers moved out, some going to Canary Wharf, Fleet Street was no longer the heart of the press.

Geri mused over the differences in newspapers in the 1970s and 1980s when there were no mobile phones, only manual typewriters and you had to queue outside a telephone box to ring through your copy to the news desk – if a competitor hadn’t jammed a coin in the coin slot!

She is often asked if journalism is a suitable career for your child, and (with apologies to Noel Coward) replies, ‘Please don’t put your daughter on the Street, Mrs Worthington.’

It's 100 years since Rupert, first appeared in the … END_OF_DOCUMENT_TOKEN_TO_BE_REPLACED

I had a little … END_OF_DOCUMENT_TOKEN_TO_BE_REPLACED